December 13th!!
One Spirit Origin Presents the Pre-party for The Last Jedi at The Oriental Theater with live music, vendors, food truck, a very special guest, and a costume contest and raffle with prizes that any Super Fans fan would love!!!

Haley Johnsen is not one to miss: she is a one-of-a-kind voice with gusto and soul and mesmerizing presence. One of the Pacific Northwest’s most individual up-and-coming acts. Her sound is strong, percussive and inviting, with impeccably crafted lyrics of a strong woman with an affected, but unbreakable heart. 2014 saw the release of Through the Blue, a seven-track EP that grapples with the process of love lost and life thereafter. 2016 gave the release of her soul inspiring single, “Feel the Water,” which has been given local airplay on KINK.FM and Portland Radio Project.

Over the last few years, Haley has earned local and national attention taking her impactful solo show on recent 2017 US tours with Austin Texas based band The Wind and the Wave, Seattle based band Gabriel Wolfchild and the Northern Light, and Season 8 Winner of the Voice, Sawyer Fredericks. Haley also has the capacity to take her shows up to eleven with her 6 piece versatile rock band, which is most representative of her recorded music.

Look who has joined the forces of the music project “All Chiefs”.
All Chiefs, the next big rock band. Mainstream meets indie with talented musicianship and infectious songwriting that is reinforced by an unforgettable live performance.

Just confirmed his presence: D.C. Barns from the cast of Star Wars. He entered into and won a UNICEF campaign called “Force For Change”, in order to appear in Star Wars: The Force Awakens (2015).

“Irie Still” is a Colorado based band and was founded in 1995. Their style, steeped first and foremost in the danceable beats of Reggae, incorporate elements of Hip-Hop, Soca, Dancehall, Calypso, Ska, Afro Beat and Tribal Rhythms with conscious lyrics.

DJ Thred, is an international DJ Artist, that has been in the scene spinning sounds enlightening the dance mood levels expanding mental experience.

Mythica Von Griffyn is a mistress of the art of body painting, award winning chalk artist and educator. Mythica is extraordinaire and inspirational muse with a touch of unconditional love and creative insight. One of the contestants on Season 1 of Skin Wars on GSN, 2014. 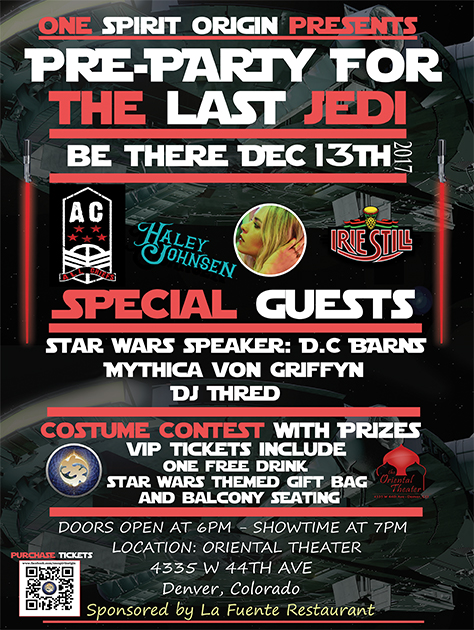